Samoyed Club of America 2016 National Specialty was held in Albany, OR.
While I competed with the girls in agility, Frank set up the dog area around our motor home to give them more rooms to play. 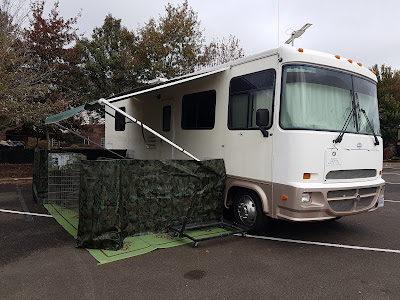 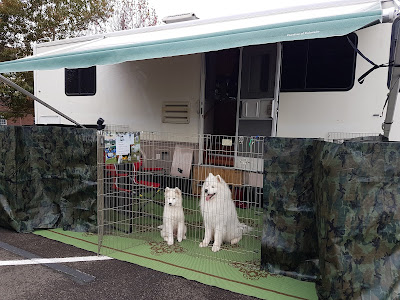 Beckham and his daughter Morgan. 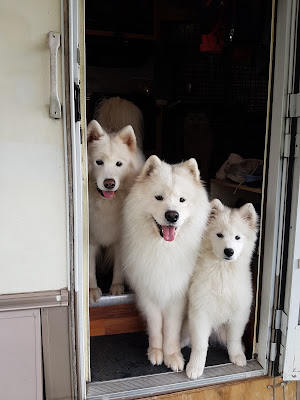 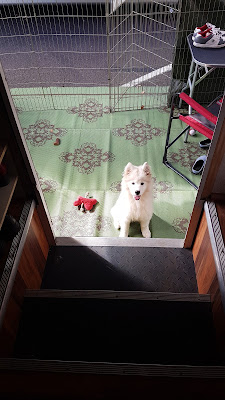 Morgan, are you coming in?

The week of competition started with agility.
Hermione got 1 open standard and 3 open jumper, i.e. her title in Open Jumper
She came first in Open jumper at the Samoyed only trial at the National.
Moka got a novice standard and a novice jumper and came 3rd in the novice jumper class. 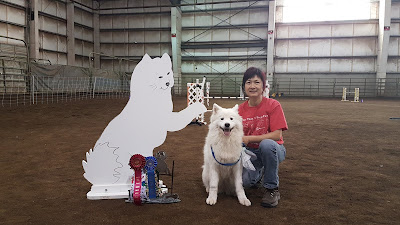 The next competition is Futurity.
The purpose of the Futurity Stakes is to encourage the breeding of the best possible Samoyed and to reward the breeders for their efforts.
Both sire and dam will require to be UTD on their health clearance before the breeding. The litter will be nominated before whelping and puppies nominated before 4 months of age. 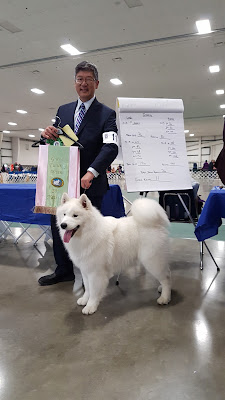 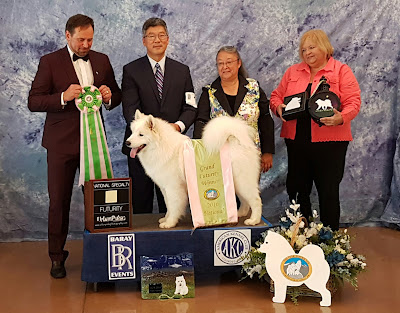 Enzo - Firecloud's Fortune favors the Bold, bred by Tami Lynch/Cindy Hopkins.
He is out of Beckham ( Ch. Dormo's Three out of Three) and Zoe ( Am GCh. Firecloud's Serenity in Space, CAA)

The next competition is Sweepstakes.
Moka took 4th in Working Sweeps. 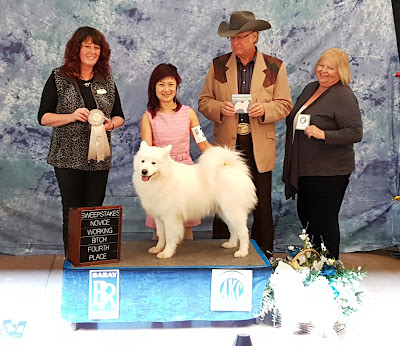 The next day, Beckham took 4th in Bred-By-Exhibitor Dog class. 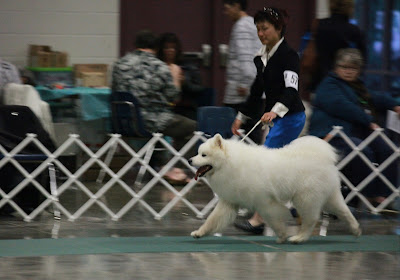 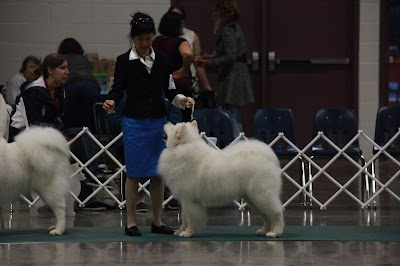 He is very proud of himself. 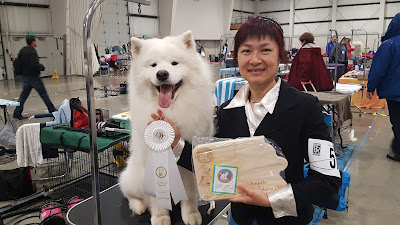 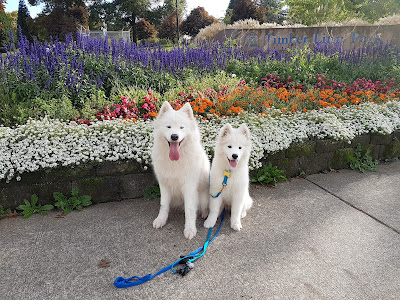 This year's show site was next to a beautiful park with lots of trails for the dogs.
Little Morgan learned to Sit/Stay next to auntie Moka. 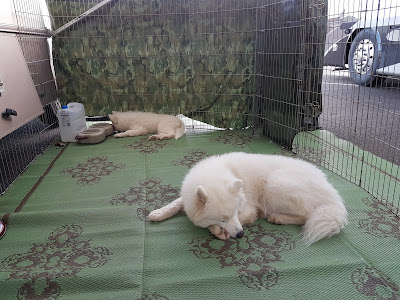 Taking a nap after the show. 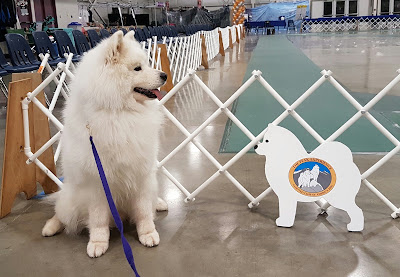 Beckham posted in front of the logo.
Who is cuter? 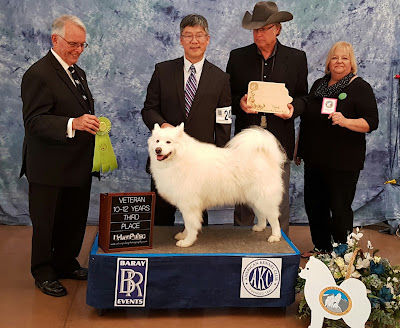 The next day, Moli - our foundation bitch, took 3rd in the Veteran 10-12 years old bitch class. 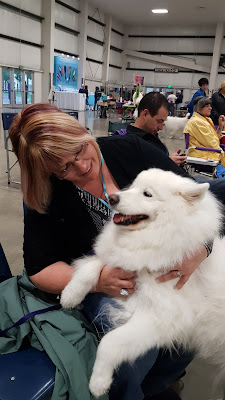 Moli also got to meet her breeder, Erica Flahaut, who she hasn't seen since 2007. Moli also got to meet her first love - Wizard, whose motor home parked right next to us. They haven't seen each other for over 7 years. 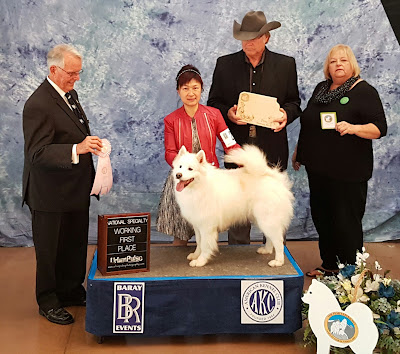 Hermione took 1st in the Working Bitch class on the same day.

We finished the week of competition with a 3rd place in Brace- performed by Hermione and Moka. 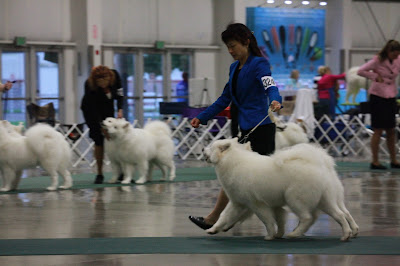 The girls were in unison. They moved like one, 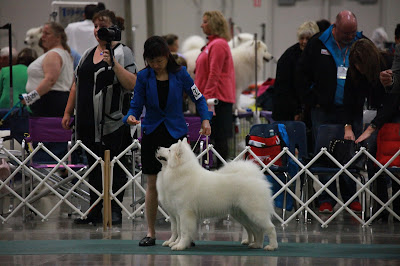 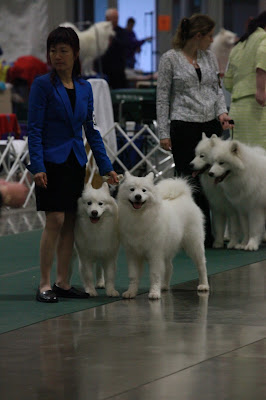 They look alike. Of course, they are mother and daughter. 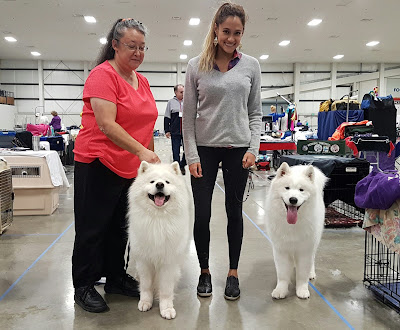 And Beckham got to post with his son Enzo.

This is our final count for all the goodies we won. 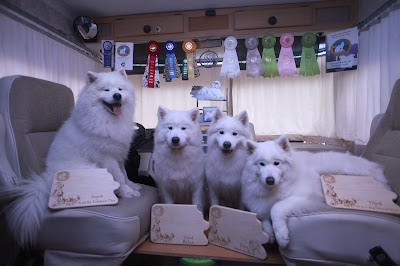